7 currencies account for over 80% of the volume of the forex market, and the Canadian dollar (known as the “Loonie” because of the appearance of a loon on the back of the C$1 coin as slang) is one of these major currencies, and is the fifth-most held currency as a reserve. 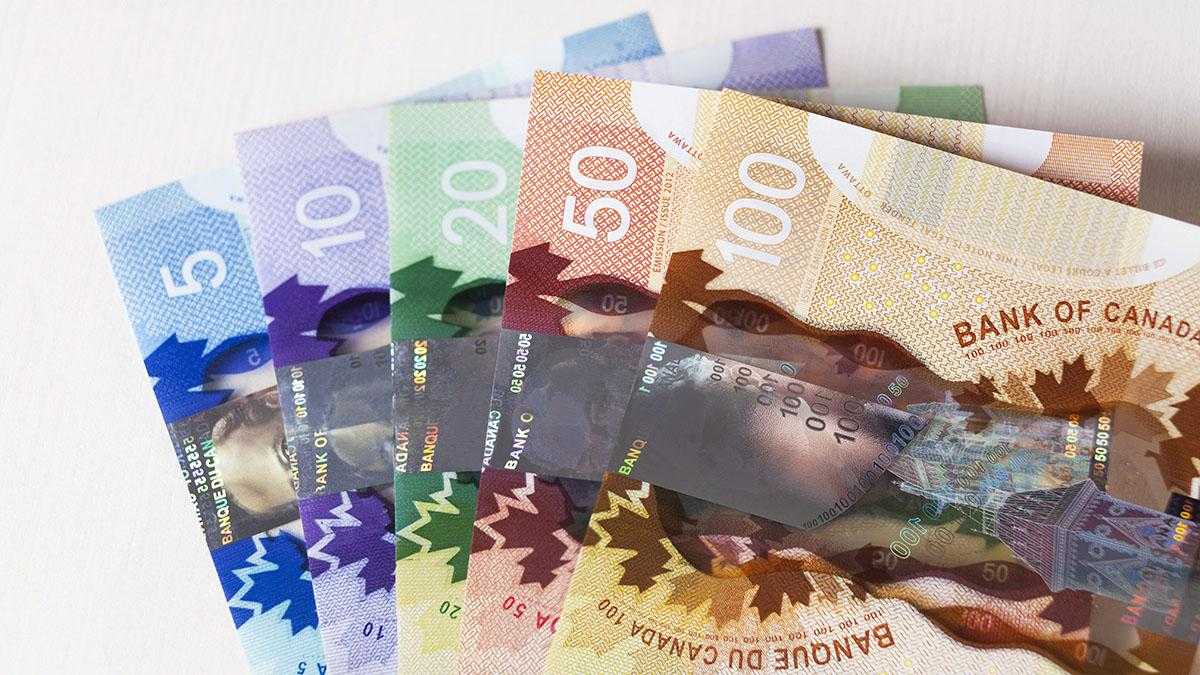 The Canadian dollar’s currency (CAD) ranks 10th in the world but relatively low on the list of major economies in terms of population, yet it is the 11th largest export economy in the world, according to theÂ Observatory of Economic Complexity hosted by MIT.

All of the major currencies in the forex market are supported by central banks. For the Loonie itâ€™s the Bank of Canada. Â The Bank of Canadaâ€™s core job is to find a balance between policies that will promote employment and economic growth while containing inflation, as is normal for a central bank. Despite the significance of foreign trade to Canada’s economy, the Bank of Canada adopts a relaxed approach in relation to the currency â€“ the last intervention was in 1998.

The economics behind the Canadian dollar

Ranked 10th in terms of GDP (measured in $USD) in 2017, Canada has enjoyed relatively strong growth over the last 20 yearsÂ with two recessions in the early 1990s and 2008. Canada famously navigated the later recession thanks to better fiscal policy and an improved current account balance have led to lower budget deficits, lower inflation and lower inflation rates. The structure of Canada’s financial market i.e. more regulation, helped the country avoid many of the problems with toxic subprime mortgages. That said, major technology companies are less significant to Canada’s economy, meaning less growth during the techÂ boomÂ in the USAÂ in the 1990s. Also, the commodity boom of the 2000s (particularly in oil) led to an outperforming loonie.

Related:  Sending Money Abroad? Watch out for These Common Pitfalls

The close and necessary trading relationship between Canada and the United States (they both make up over half of the other’s import/export market). While polar opposites in social policy, certainly at the moment. Events in the USA have a profound effect on CAD. Canada is a meaningful producer of petroleum, minerals (potash), wood products and grains, and the trade flows from those exportsÂ can influence investor sentiment.

Major economic data includes the release of GDP, retail sales, industrial production, inflation and trade balances. This information is releasedÂ at regular intervals, mainly monthly and quarterly as is the case for most of the G7 countries. Investors also take note of employment, interest rates (including scheduled meetings of the central bank), and the daily news flow â€“ natural disasters, elections, and new government policies can all have significant impacts on exchange rates in general. Again, movements in the US have a more profound effect on Canada.

As is often the case with countries that rely on commodities for a sizable portion of their exports, performance of the Canadian dollar is often related to the movement of commodity prices, especially Brent crude and WTI oil. In the case of Canada, the price of oil is particularly significant forÂ currency moves, and investors tend toÂ go long on loonies and short on oil importers e.g. Japan when oil prices are moving up. Against larger economies like China and Europe, fiscal and trade policies have an influence on major importers of Canadian materials.

In summary, the main factors known to influence the value of the Canadian dollar are:

Related:  How to Invoice International Clients

The Canadian dollarâ€™s dependence on commodity pricing proves a relationship between the Canadian dollar to the pricing of crude oil. The decline in crude oil price from the period of August 2014 to January 2015 could be understood as reflecting this relationship between crude oil pricing and the market value of the Canadian dollar. Crude oil prices declined from roughly US$105 per barrel to US$45 per barrel during the period from August 2014 to January 2015. Canadaâ€™s overall economy and energy sector was greatly affected. In the last 3 years oil has railed back 300% and in the last 3 months has corrected 30%, WTI trades at just under $51 USD and Brent Crude just under $60 in a volatile time for oil, and the CAD also.

Commodities represent a larger share of exports in Canada compared to the United States and many other countries. When commodity prices rise, Canadaâ€™s terms of trade improve because its goods have become relatively more valuable. Since Canadaâ€™s effective purchasing power is higher, this movement is usually reflected in a higher exchange rate. The opposite also holds: weaker commodity prices can translate into a weaker Canadian dollar. The graph below demonstrates the classic and usually typical, tight correlation. 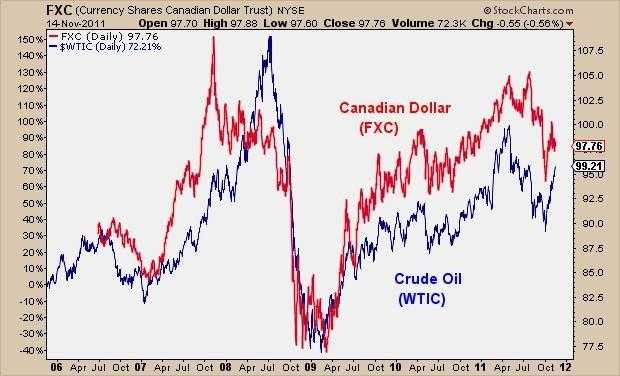 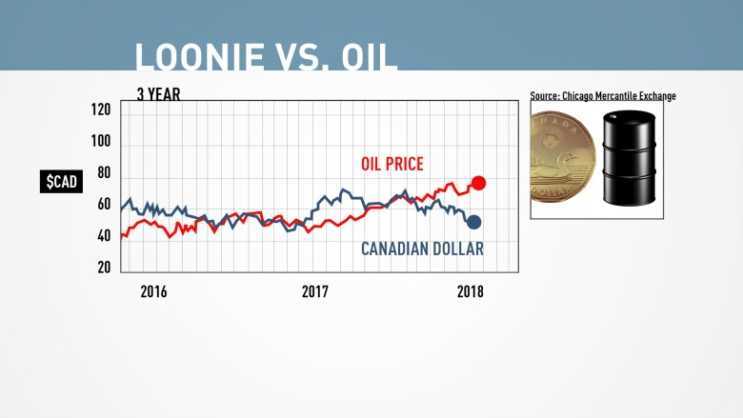