The eurozone continues to show massive economic recovery. The monetary stimulus has caused a fresh uptick in the bloc, improving the euro currency rate significantly. The Euro Currency Rate Continues to Rally Against the Dollar

At the FOMC press meeting, the Federal Reserve as anticipated took a dovish stance. Though the economy continues to curl under the rising coronavirus cases, Fed Chief Powell kept rates unchanged. The statement from the Fed revealing the key link with the economy and stemming the infection rate of Covid 19. Analysts had predicted strong forward guidance from the chief regarding further policy actions. arguably this was fulfilled with the Fed announcing that rates would remain at low levels until they had effectively weathered the storm , the dollar outlook continues to remain weak, against a strengthening euro currency rate.

The euro currency exchange rate against the USD pair has been moving upwards steadily. It has been rising from levels of 1.1185 seen in the first week of July. On Wednesday, it touched levels of 1.1769 on Wednesday, 29 July. There was a slight weakening on Tuesday, 28 July, but the EUR/USD pair gained strength again. Further, the hope of a coronavirus vaccine brings a wave of hope in the economy.

The worldâ€™s most popular currency pair (euro currency rate against the dollar), however, is under a risk-off environment with the EU deal causing some concern in the short term.

The euro currency rate against the dollar is above the 1.15 handle and shows continuing strength in the currency market. The next resistance is at 1.18 levels. If the eurozone continues to show positive sentiment, the euro currency exchange rate may move towards levels of 1.20. The EUR/GBP broke its 4-week high level to touch 0.9148. However, the euro currency rate gave up its gains against the British pound on Tuesday. It has currently lost most of its gains trading at 0.9073, below the crucial levels of 0.9100.

The euro currency exchange rate is relatively underperforming against its British counterpart. Though negotiations on Brexit on Thursday did not show significant progress, the GBP has performed well against the euro. It is slightly off its 4-month high of 0.9179. The euro currency rate has gained with the rescue package agreed upon in the eurozone. Brexit concerns, however, weigh down on the pound.

The EU summit in July was the longest in the history of the eurozone. The meeting lasted five days before the â‚¬750 billion package for the COVID-19 relief fund was agreed upon. It, however, reflects coordination by top leaders in the EU.

In the United Kingdom, PM Johnson has sounded a warning about taking decisive actions in the economy to prevent a second attack of coronavirus hitting the country. Those who arrive from Spain are imposed a two-week quarantine to prevent further outbreak of the pandemic.

The pound has benefited by the weakening dollar.

The EUR/CHF continues to remain positive, with trading remaining long on the pair. The 38.2% retracement level at 1.07566 is said to take support at this level. On Monday, it reached a multi-week top of 1.0835 but continues to slide again.

The USD/JPY pair is under pressure. The pair closed at 104.98 for the weekend on Friday 24 but shows a downtrend. It saw a steep fall on Wednesday to touch 4-month low levels of 104.81. It continues to show a bearish stance in the short-term. The RSI indicator has consolidated at 30. The USD/JPY pair has strong support at 104.45. If it breaks this level, it may rally further downwards. 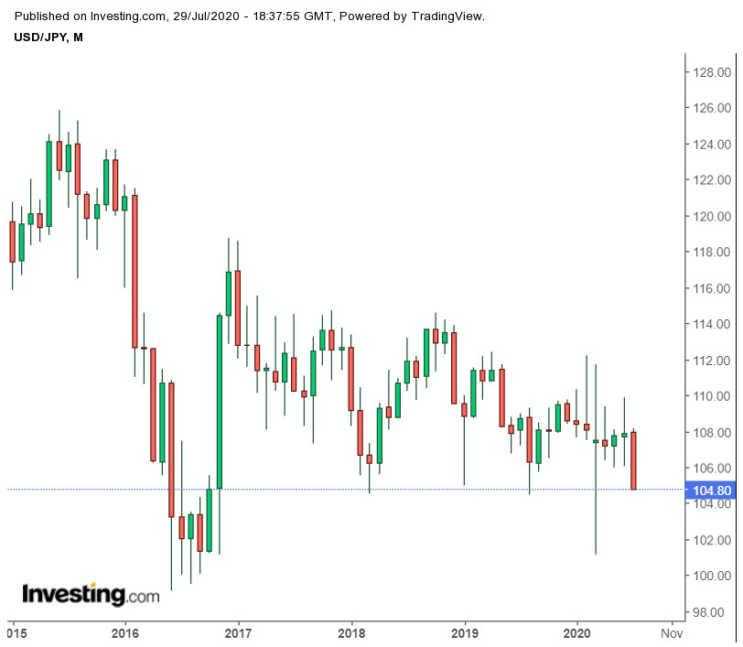 The US dollar sees a further weakening after it broke levels of 95 last week. On Wednesday, at 2.41 pm GMT, it was seen trading at 93.48. It hovered around its two-year low on Tuesday.

Coronavirus continues to hit the health of the economy too. Weakening yields is another factor that dampens the economy. Investors continue to look for safe-haven assets elsewhere.

Following a mild pullback in gold prices, the greenback found support and was able to see a small rise. FOMC decision tends to keep gold prices volatile, every time an announcement is released.

Markets are volatile too, whenever an FOMC statement is expected. In particular, the US dollar tends to show larger-than-normal fluctuations when interest rates are to be released.

The Federal Reserve will issue a statement later on Wednesday. Rates are currently at near-zero. It remains to be seen how Fed officials plan for the future.

Central banks of Australia and New Zealand are showing signs of relief with the coronavirus pandemic controlled in these regions. Though it is too early for any rollback measures in the economy, there is no need for further easing in the interest rates from current levels in these regions.

In Hong Kong, the government has reported a contraction in the economy by 9 percent year-on-year for the second quarter. It has contracted for the fourth consecutive quarter.

Tensions continue between the US and China, which is of rising concern.