Turkish and US relation

Relations between the US and Turkey hit rock bottom following the arrest of two US consulates in Turkey; however many more US citizens have been detained in Turkey following the military coup which took place in July 2016. The vast majority of the detained were US citizens working for US mission relief, or Turkish working for the US mission relief.

Tensions have also been elevated by Washington which took the decision to stop all non-immigrant visa services in the country. Turkey persisted with the tit-for-tat politics and did the same.

Put simply Turkish inflation is out of control and in November hit 13-year highs. The main driver being cheap credit, a strategy opted for by President Tayyip Erdogan’s who planned to sustain the economy through lending. However, in the recent months, growth forecast has waned and with the Turkish economy very likely to miss this year’s and 2019’s growth forecast it would appear the strategy has met its downfall.

Related:  USD/TRY is a Top Performing Currency that Gained 5% in 2021 One issue that investors have with Turkish policy is the amount of intervention the Turkish president has; In mid-November, he openly criticized the Turkish central bank monetary policy, this particular outburst related to Turkeyâ€™s interest rate levels which sit at 8%.

In one conversation with an official in Ankara the president stated:

If you try to give loans with such high rates, of course, investments will be hindered and halted… We lowered interest rates and inflation fell to single digits.

Many interpreted the move as wholly insufficient with calls for stronger action required in order to curtail inflation.

Decline in Turkish lira exchange rates against the Euro

In recent months the lira struggled against a basket of currencies and sits at historic lows against many of the majors. Over the last six-month EUR/TRY has moved from 4.11 to 4.72 with almost no resistance in place. With the markets negative view on the Lira, its adopted half measure and growing tensions the Euros strength against the Lira is unlikely to decline. Performance of Turkish lira exchange rates against the US Dollar

Likewise, the USD has continued to break records against the Turkish lira and over the last three months, the USD had moved from 3.58 to 3.95. The currency pair having an annual change rate of 14.78%. 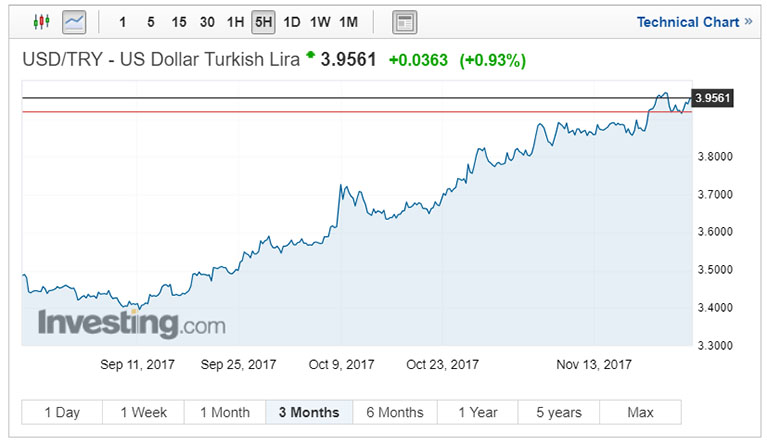 In recent days it would appear that the Turkish president has warmed more to the idea of raising interest rates. This move could contribute to getting inflation back under control and give investors more confidence that the Turkish central bank has some level of autonomy.