The Dollar had enjoyed a slight boost following the FOMC minutes which claimed that no further easing would currently be required. The gains seen on Wednesday were short-lived, however, as the sources claimed that it was now extremely unlikely that the US and China could now strike a trade deal this year. The FED released its minutes following last months US interest rates cut which saw the rate cut from 1.75% to 1.5%. The minutes confirmed that they felt that only in the event of further economic tailwinds would another interest rate cut be required.

The members also confirmed that the move in collaboration with strong job data and inflation close to the ideal 2% would assist the economy in achieving moderate economic growth.

The FOMC members confirmed that they envisage rates to remain static for the foreseeable and believe the full effects of this yearâ€™s rates cut wonâ€™t be felt until next year.

The minutes also stated that they felt the US economy was in a fairly healthy state. The jobs market remains healthy and the economy is being supported by consumer spending, with consumer-led spending accounting for 70% of US GDP.

The Dollar gains were short-lived as news broke on Thursday that US china trade talks were unlikely to result in a deal this year. In recent weeks the two superpowers have managed to gain a lot more traction with talks slowly taking shape.

Whilst in recent days Trump has played down the rumours of the unlikelihood of a deal this year stating itâ€™s still possible, markets would appear to differ and the USD did lose the gains it enjoyed following the FOMC minutes.

The phase one deal on trade which Trump has stated was nearly done over a month ago could still be wrapped up. It is highly likely that the US will be keen to see what happens following the election in Hong Kong. Trump recently claimed that â€˜thousands of people would have been killedâ€™ if it had not been for him. Such was the eagerness for China to wrap up a trade deal. It does appear clear that Washington is not going to turn a blind eye to what is taking place in HK.

Another potential risk to the Dollar once again circles around the activity of Trump and the impeachment hearing. Trump is accused of withholding $400m of military aid destined for Ukraine in order to leverage an investigation into Joe Biden. Trump teamâ€™s aggressive approach to proceedings has ensured that support from the Republican party appears unlikely to dip. The enquiry is however slowly closer to the President and as proceeds come to a close in anticipation of thanksgiving it will be interesting to see how things take shape after the festive holiday.

The Dollar consequentially has slipped against many of the majors, notably the Japanese Yen and Euro. The Euro USD pair appreciated to 1.1092 just over a week high from a low of 1.1055 following the news of the delay of a US-China trade deal. The Dollar currency has recovered early on in this trading week with USD gaining significantly against the single currency. The Japanese yen also benefited from the trade deal news with the USD-JPY falling to a week low of 108.32, the dollar has since recovered slightly but the slump marked the lowest rate since mid-November when the pair touched 108.28. 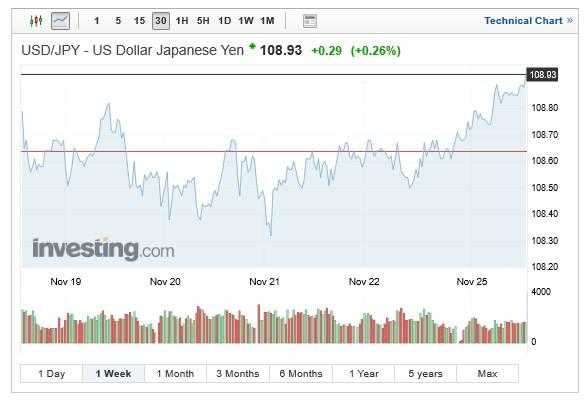 The week is surprisingly busy for USD, despite the upcoming festivities. Key data for the week include consumer confidence, durable goods orders and Chicago PMI data wrapping up the week on Friday. However much of price movement will be driven by news from the potential impeachment and notable developments in the US and Chinese trade negotiations which could still evolve before the US national holiday. The president still remains bullish on the possibility of a deal before the beginning of 2020, once clarifications on the HK election results are published the reaction from China will be crucial and could help or hinder trade talks.

Cryptocurrency Trading Volume to Increase in 2021