A basket of emerging market currencies was sold off this week fuelling speculation that the Turkish Lira’s losses could be spreading to other economies. Emerging market currencies such as the South African Rand, Argentinian Peso and notably the Indian Rupee all seeing significant declines this week. Not escaping the ripples from the fallout, stock markets and commodity prices have also been devalued.

Experts are now concerned that emerging market economies who also enjoyed the era of cheap cash to fuel development, infrastructure projects and investment will also now begin to feel the effects.

Whilst many of the issues surrounding Turkey’s financial downfall can be related to policy and the nation’s souring relationship with the US, economists remain concerned that this could be the first of many emerging market economies at risk.

The Turkish Lira slide has taken its toll notably on the South African Rand which has tumbled to a 24 month low against the Dollar. Whilst much of the decline has been due to a lack of appetite for emerging market currencies caused by the Lira’s downfall. The USD/ZAR has been elevated further due to a downbeat appraisal by the Moody’s investor service. Moody’s the rating agency concluding that the pace of nations fiscal consolidation will be slower than the government has anticipated.

The rating agency also predicted that the ever-increasing public sector wage bill and weaker than expected economic growth could provide further challenges for South Africa. The ZAR losses were further accentuated as the biggest company on the Johannesburg stock exchange, Naspers stock price fell. The company which accounts for 18% of the index tumbled after Tencent Holdings Ltd a sister company reported its latest earning which missed the target. The move prompting the largest fall since May. 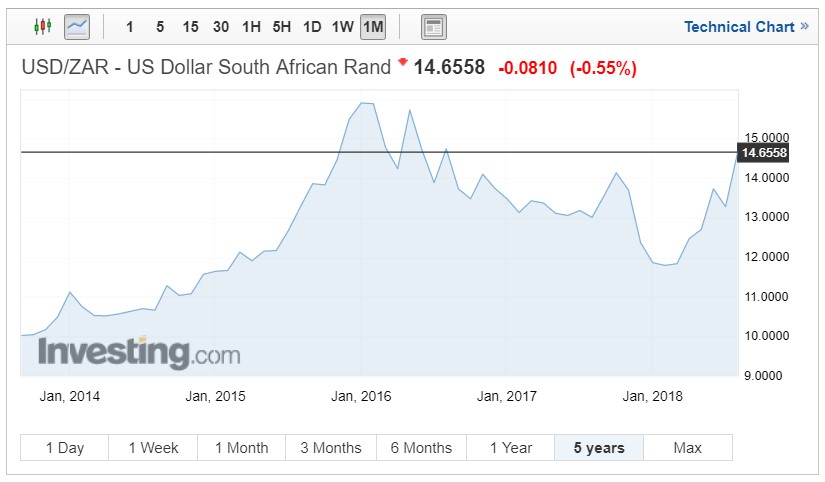 Over the last 3-month, USD-ZAR has enjoyed aggressive gains touching a high of 14.9806, the highest level since August 2016. Currently, the pair sits at 14.6558, with the Rand’s issues far from solved.

Indian Rupee touches all-time lows against the US Dollar 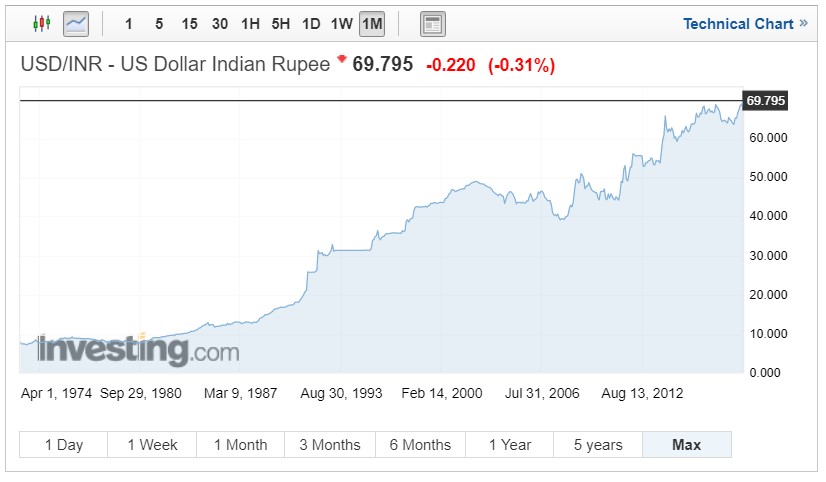 This week saw India’s trade deficit widen to in excess of a five-year high. The trade deficit which now stands at $18.02, has been exacerbated by an increase in oil imports.  All of which has led investors to the security of the US Dollar. Recently USD-INR exchange rates have rocketed above 70.00, touching all-time highs of 70.670. The pair closing trade on Friday 69.95.

The INR has almost certainly had the legs to drop further despite intervention from the Reserve Bank of India. Increasing oil prices, investor exodus from emerging markets plus the likelihood of further US interest rate rises will all attribute to losses for the Rupee.

The Argentine Peso similar to the Rupee has hit all-time lows against the USD falling to a record low of 30.375 this week. The ARS struggling with any support despite a multitude of interest rate rises earlier this year. In June the Argentine Central Bank agreed to a deal with the International Monetary Fund. The three-year deal which will allow Argentina access to a $50 billion safety net following an exodus of investors.

The IMF has yet to ratify the deal however the Managing Director Christine Lagarde said:

“This measure will ultimately lessen the governments financing needs, put public debt on a downward trajectory, and as President Macri has stated, relieve a burden from Argentina’s back.” 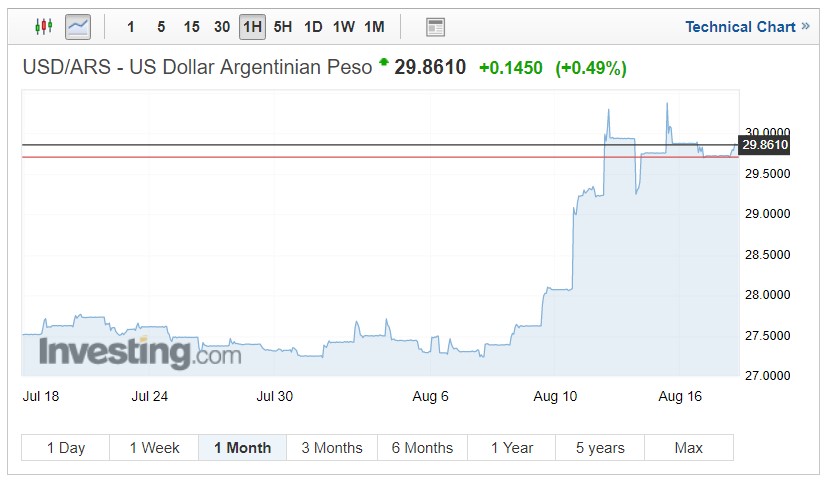 The USD-ARS has eased slightly and is closed Friday’s session at 29.86, following the all-time of 30.375. The dollar is likely to continue its trajectory and therefore expect further gains.

A short update on Turkey and the Lira

The Turkish economies issues have deepened further this week as the US fresh sanctions this week. The lira fell over 7% despite enjoying gains as over this week. The US treasury secretary declared that the US was planning further sanctions against the Turkish President Tayyip Erdogan with Turkey rejecting an appeal from Pastor Andrew Brunson this week. Pastor Brunson is charged espionage and links to terror following the attempted coup in Turkey.

The situation is now becoming personal and experts believe more fluctuations in the TRY exchange rate could be seen over the coming weeks.