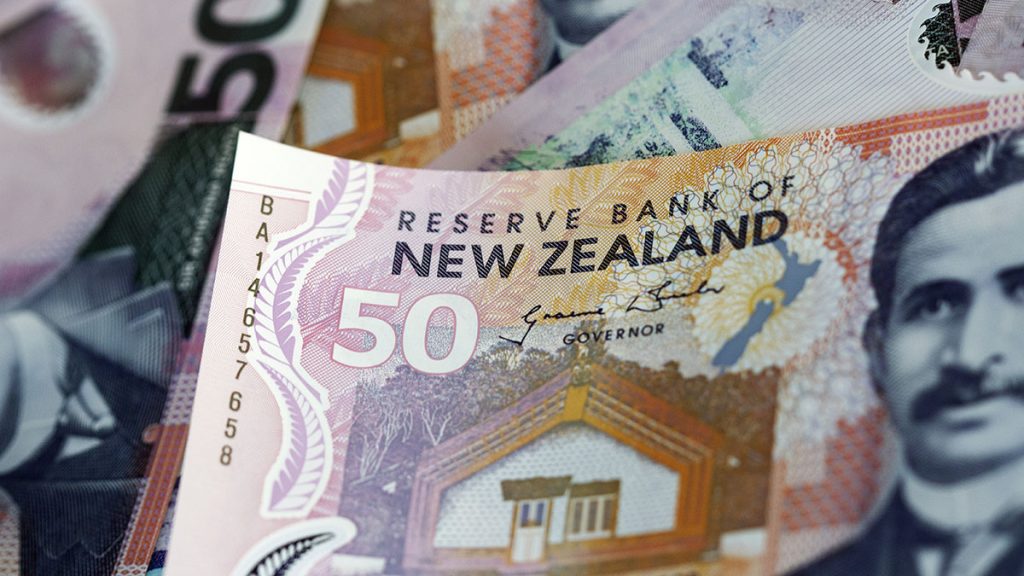 It’s not a surprise that the Pound has been one of the worst currencies globally the last 12 months but the New Zealand Dollar isn’t far off within the G10. The UK has had a host of its own macro and political influences affecting the value but for New Zealand, inflation data will likely dictate its next move.

The Pound-to-New Zealand Dollar (GBP/NZD) rate is trading at 1.935 on Monday 15th April and has stayed in that range for most of the last two months.

Technical analysis from the charts

From a technical perspective the outlook for the GBP/NZD exchange rate is neutral given the conflicting signals on the weekly and daily charts, and the fact the pair has been range bound for several weeks now further demonstrates both currency’s weakness.

The daily chart above is potential leaning slightly bullish; whilst the pair is ranging sideways, the repeated attempts to push above the range highs (circled) are a bullish sign. Despite some “fakeouts” when price action attempts to make continued efforts to break above a level it is a bullish breakout sign. If you are a chart and graph person, any upside will be impeded by heavy resistance at the 1.9573 level from the 200-week moving average (MA) and this recommends caution in forecasting a surge higher if there is a simple break above the range highs.

Usually, we would like to see a clear movement above the 200-week MA, signalled by a break above 1.9650 before confirming a continuation higher to a target at 1.9870. This target is based on the height of the range again, the usual forecasting technique applied by analysts for this sort of breakout.

The weekly chart is much less bullish than the daily chart in other ways too. The general structure of the market revealed on the weekly chart lends itself to a more bearish interpretation overall. Price action looks like it might be forming an ABCD or Gartley pattern lower and is in the process of finishing the intermediate leg and starting another leg lower.

What’s coming up for NZD

Numerous global indicators that signal a recession have been touched on or started to show signs from 2008 i.e the Yield curve yet one ongoing major issue that does seem to dictate optimism in global markets is the US-China trade war. Chinese economic performance and trade issues will remain an important driver even though Chinese figures are always to be taken with a pinch of salt.

“Chinese economic data provided a welcome surprise with exports rising by 14.2% y/y in March, even as imports were weaker falling by 7.6% y/y. Much of this improvement was probably still a degree of catch-up from very weak January data, but nonetheless, it helped the mood which is already lifting as a result of optimism over the trade talks,” says Timothy Fox, Head of Research & Chief Economist at Emirates NBD.

For the New Zealand Dollar, the most significant release will therefore probably be Chinese Q1 GDP data on Wednesday because China is New Zealand’s largest trade partner and so changes in the Chinese economy affect demand for New Zealand exports and ultimately the exchange rate. Previously, any slight chances of negativity in trade talks have caused the NZ to tumble.

“Given policymakers’ focus on global growth, without doubt, the official release of China’s Q1 GDP growth (Wed) will be watched with interest,” says Henry Occleston, an analyst at Lloyds Bank. “It is forecast to be marginally weaker than prior, though with positive sounds from the IMF, and the stronger than expected trade data we saw this week, it could surprise on the upside.”

New Zealand Q1 CPI is released on Wednesday and will be key for both rate cuts pricing and NZD direction,” says Richard Grace, a strategist with CBA. “A softer than expected New Zealand Q1 CPI release will weigh on NZD and increase market expectations for an RBNZ rate cut in May.

Westpac see the Royal Bank of New Zealand (RBNZ) having to lower interest rates further as soon as the May policy meeting. This makes this week’s set of figures significantly more important.

“Headline inflation has persistently undershot the 2% mid-point of the RBNZ’s target band for seven years now (save for one petrol-soaked quarter in 2017). And even with substantial fiscal stimulus now being rolled out, the forces that have dampened price growth in recent years are still present,” says Richard Franulovich, Westpac’s head of FX strategy.

What’s coming up for GBP

Brexit has now been ironically delayed to the scariest day of the year; Halloween so will likely be less of a major factor for the Pound in the short-term. The pound has become a politically-charged currency in the last 2 years more than ever but the politicians are having a 2-week holiday from all the ridicule they have received in recent months.

It will be old fashioned data will that will move the market, specifically the UK labour market data out on Tuesday, April 16th. Of the various labour market stats which will be released average wages will be the most important.

Average earnings are expected to show a 3.4% rise in February compared to the 3.4% previously, and wages including bonuses, a 3.5% rise. Forecasts are quite high and if the actual figures are even higher it would almost certainly give a lift to the Pound. If wage data is solid it will trigger stronger retail sales data for later in the week.

The Bank of England (BoE) is monitoring wages (amongst many other data sets) and have suggested they could raise interest rates in 2019 should wage rises continue to be robust. And, expectations for higher interest rates at the central bank tends to be a positive driver of Sterling.

We are anticipating that average earnings will show a pick-up in the headline rate of income growth in the 3 months to February to 3.6%y/y while regular pay rises by 3.4%. This would reflect the rightness that we continue to see in the labour market amid ongoing delayed corporate investment spending, says Henry Occleston at Lloyds Bank.

Jobs are forecast to have increased by 180k 3 months-on-3 months in January from 220k in December, and expectations are the unemployment rate will stay at 3.9%. Current forecasts are for retail sales to show a -0.3% fall in March from 0.4% in February and a 4.6% rise year-on-year. A tough 2018 on the high street and Debenhams going into administration (pre-packed) this month doesn’t pave long term optimism for old fashioned retail.

The other main release for the Pound is inflation data for March out mid-week, which is forecast to show a 0.3% rise compared to the 0.5% increase previously, and a 2.0% rise compared to a year ago. Higher inflation tends to drive up Sterling since it usually results in the Bank of England (BOE) having to raise interest rates which theoretically attracts higher foreign investors.